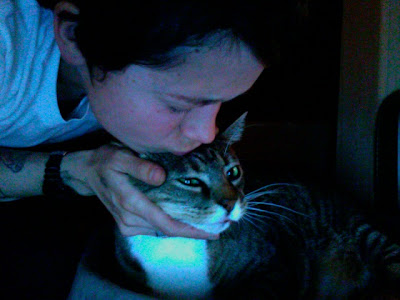 and not the pregnant paper planes kind!
i had written some text the other day under the title BABYSEAL WENT MISSING FOR ONE.5 DAYS! but now one.5 days after her return, she is missing once more! what once passed as humourous prose now seems rather insensitive considering the current state of affairs. . . .
so now with all due respect, i shall put here few highlights of the piece which i shall respectfully rename MOMENTS, WITH BABYSEAL:
-BABYSEAL snores in her sleep. it is adorable. and remarkably loud.
-BABYSEAL lives. for snack time. ilvs: did you just throw something at me? geode: no, BABYSEAL was eating and turned her head fast to look at Peter Peter Jennings and a piece of cat food flew out of her mouth. ilvs: BABYSEAL, i love you.
-BABYSEAL is a lover of animals. except for her brother Peter sometimes when he comes in from being outside and smells of foreign smells at which point she turns into a hissing gremlin and lazily swipes at him from her prostrate lounging position when he gets too close.
BABYSEAL, please come home.
Posted by ilvs strauss at 10:33 PM

Labels: BABY SEAL GET DOWN