I didn't hear about the shootings till late in the afternoon. My girlfriend's text to me started with, 'You're alive, yes?. . .' and I nearly dropped the phone. Primarily because I already had the answer, and secondly, because of the news that followed, 'more shootings in seattle today.' I texted her back saying I would answer in email form. (If my phone doubled as a camera, I would have just snapped a photo of my journal, but as it stands, I had to scan the page and email it to her. Which showed up on her phone - I'm a few years behind with technology.) That morning in my journal I drew this: 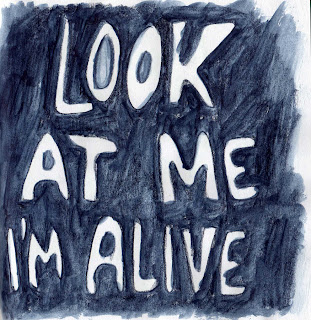 The sky right now looks about the color of the background.

This morning I read the paper about the shootings. I had met and worked with two of the victims. There were quotes from other friends about them. This is not how I want to see my friends name in print.

And for me, living in Seattle, I have to remind myself that though there might be rain, the sun still burns bright.