I sleep in socks.

nearly a month has gone by and my blog has suffered inversely to how much i have been sleeping in sleeping bags. were it truth that too my suffering were inversely proportional to this alterna-bedding i have been subjected to. alas, it is not so.

my sleeping bag. i purchased it approx 7 summers ago for purposes of surviving 3 weeks turned into 3 months of lovely living in the woods of northern california. just prior to my shopping expedition, i watched the movie 'alive' with some buddies. for those not in the know, 'alive' is a dramatization of a true and dangerous and super unintentional expedition taken by a team of, uh. . .soccer players from. . . somewhere not in north america when their plane crashed into some south of the equator snowy mountains. or, to be more suscinct/contain more than just an inkling of fact: In October 1972 a plane carrying a Rugby team of 45 from Uraguay to Chile crashes in the Andes.

basically i walked into the camping gear store and bee lined to the negative below zero bags. my survival in the woods would not be a question. as it turns out, zero degree doesn't really factor in in northern california summers, the nice sales person assured me. so instead i went with light and compact, a stylish number with a higher up in the double digits range of comfort. perfect, i thought. and it was. for the first 2.5 months. and then it wasn't. summer was slowly whittled away by the approaching darkness of fall/winter and took with it my sleeping bag's ability to produce any iota of warmth. i survived with an extra blanket, a wool jacket, long johns, and a few nips of the old whisky. i made it through the last bit of my stay, packed up my bag and thought of it not really in the months/years that followed.

fast forward to two weeks ago. me and buddy marisa and her gluten free girlfriend wound our sweet way to the washington coast ala shi shi beach. it. was. awesom.e. except for one small detail: the hours between 10:30pm and 7:00am*. i, not having a gf gf, nor anyone else with which to intimately share my dehydrated beans with, bunked solo in a two person borrowed tent on a too short thermarest and aforementioned summer fun sleeping bag. but let us closely examine the nomenclature here.

'summer'- ok, yes, it was one day past solstice.

'fun'- yes nad (ack! why can't it just auto correct that!?) - AND no, yes AND no. while carrying a few pound bag in a bag full of other things that did not weigh a mere few pounds was grand, cursing the ocean windy weather whilst maintaining a lonely full body fetal crunch position for approx 8+ hours was not. the root of this problem? the seemingly arbitrary 'range of comfort' designation. it's printed on the case of the bag as follows:

ya right! a friend later explained that the general degree ranking is the lower limit of how cold it can be outside before you experience hypothermia. based purely on empirical evidence, i am wont to side with her wholeheartedly. i wont, too, to purchase a new warm sleeping bag. one that is not akin to sleeping in a glorified wind sock.

but what is this?! all this blathering on a singular minor albeit really uncomfortable stretch of time in what was a perfectly amazing camping trip experience! what has gotten into me? well, first let me attempt to account for this negative nelly business by claiming it a fair warning to those about to leave their urban affairs warmed with nothing more than a little cheapy nylon body bag. peoples, the extra pound or 3 is totally worth the full night of sleep. also, to my credit, the ocean beach herself is beyond explanation. i mean, what words have i for this? 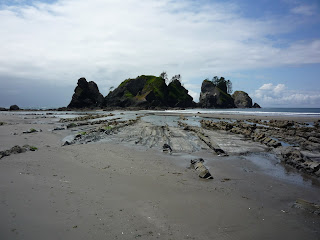 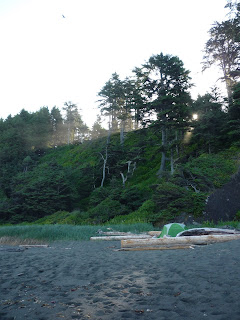 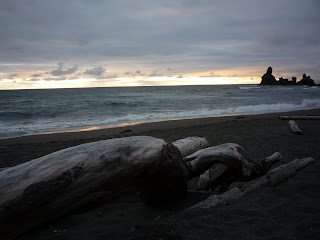 i rest my case.

*this only on the first night. the second night, i wised up and wore all the clothes i brought with me to bed. i wasn't exactly warm, but, blessed be the sea, i did not freeze. also, the chilly first bites of both nights were filed down slightly by me taking the advice of an unnamed (read: can't remember who told me this) person who, with the wisdom of a thousand wise persons, to take some rocks that had been heating by the fire into the sleeping bag with me. i felt like kinda like a lizard sunning a rock for heat. except it was dark, we were not in the desert and the rock was the size of my heart, warming my ribs from the outside.