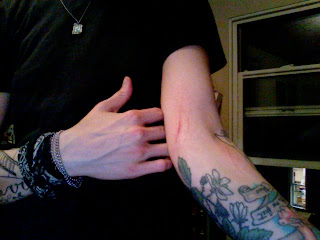 i enjoy a good evening routine. drinking coffee substitute tea after dinner. reading by the fire before bedtime. administering ointment to numerous cutaneous wounds on my upper body.
i live with 2 cats. according to the way things are gonna go from here on out, thought up by their owner/my flatmate, they, BABYSEAL and PETER PETER JENNINGS, are to go outside at night. usually, she that thought it up does it herself. the cats are moderately compliant. she that thought it up is out of town; the responsibility falls heavily upon me. somebody cue up the battle hymn please.
BABYSEAL is about the size and shape of a watermelon. an 18lb watermelon. with a cat head stuck to the end. while her outward appearance may lead one to think that any inherent catlike qualities she was born with have long ago been squandered/forgotten/eaten, let me be the first to tell you that hiding under that dense layer of insulation, there lies a fierce beast. whose claws (ilvs: hey geode, why don't you cut BABYSEAL's nails? geode: why don't you cut BABYSEAL's nails?) protrude far beyond fleshy flesh and can pretty much cut thru all layers of human epidermis with little to no effort. when provoked, the results are stunning. in the worst way possible.
the photo does my feline inflicted injuries no justice. there is no visual substitute for the impressive torque of a cat body trying to escape, the sting of a cat's claws slicing human skin, the resulting mixed feeling of anger/guilt/utter defeat.
BABYSEAL: 1, ilvs: -5
she that thought it up does not return for another week.
like an ill fated victorian Misses living next door to the Count, i dread the coming of night.
Posted by ilvs strauss at 12:46 AM

Labels: BABY SEAL GET DOWN, near bodily harm