BABYSEAL is a SAINT. and cries. tears of blood for you. 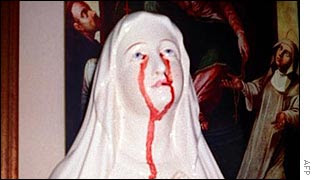 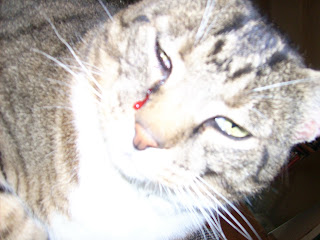 two days ago i wake up to a phone call from my roommate who woke up to a phone call from random stranger saying she found BABYSEAL's collar in the middle of John street. not the worst news ever, but certainly not definitively good. i got off the phone with not even gone 24hours roommate and head outside. i found the collar and only the collar by the bus stop where random stranger said she put it. there were no SEAL bodies lying in the street that i could see, so i headed back home.
and who should be waiting for me at the door but Peter Peter Jennings (SEALBABY's brother), Darma (sp? there's probs an 'h' in there, my neighbor's hiss inducing black and white cat) and non other than BABYSEAL! alive! and well, mostly well. she looked like she always does (uh, handsome, sturdy) except for the giant bloody tear drop coming out of her right eye. mother mary, check out the photo, it looks fake, but trust me, BABYSEAL's blood tears are real. (for the record i feel a little bad about getting all paparazzi on the SEAL in her time of trauma, but i had to get documentation.) it was like one of those statues that people flock to holy pilgrimage style. i was close to calling the pope but instead called her human back to report the news of BABYSEAL being cannonized as saint sometime in the wee hours of the morning. since when did being made holy require a trip to the vet?
the seal doctor was nice and SEAL was well behaved. she (dr.) surmised that she (her holiness) got in some kind of scuffle that ended up with her (meow) getting a small laceration on her (again with the meow) eyelid, before running like hell and losing two nails to the asphalt in the process. ouch. i looked at her (furry beast) and thought, damn, you are gonna be sore tomorrow. then came the purr stopping rectal thermometer followed by some glow in the dark eye drops to check for retinal/corneal damage. there was none. but later on the way home, the stuff started gooping out of her eye and it looked like she was a cyborg crying robot juice. unfortunately, no photographic evidence exists of that. . .
so now we are home safe. SEALPUP is doing her best to keep the rug from flying up and away, waiting for half her whiskers and spots of fur on her hind legs to grow back. i am happy to have her home and now am extremely reticent to put her out. i think maybe this calls for a BABYSEAL slumber party: we stay up late watching WINGED MIGRATION, eating smoked salmon, napping on the table. im sorry, boss man, but i cannot come into work today i am busy. tomorrow, too. and the next day, for good measure.


for the record, administering antibiotics by jamming them down the held open jaws of a held down SEALPUP sounds like the worst idea ever, dear roommate whose seal i am watching over. you can take your life into your own hands, i, on the other hand, choose life. (thank you marisa for the crush it up in wet food idea. i owe you my life. or at the very least, a pint of blood.)
Posted by ilvs strauss at 9:57 PM

Labels: BABY SEAL GET DOWN, near bodily harm